The London Design Festival opened yesterday at its main hub, the V&A. The festival sees a host of designers, showrooms, design organisations and retailers participating in over 200 events across the city. For a dramatic entrance to the V&A, designer Dominic Harris of Cinimod Studio has collaborated with lighting specialist Philips to create a temporary lighting installation in the underground tunnel entrance to the museum.

Inside the walls of the fabulous museum, conceptual designer Rolf Sachs has responded to the grandeur of the building’s Henry Cole Wing Grand Staircase with an evocative installation that fully exploits the soaring height of the ornate space. Here individual drops of ink are released from the great height into a vast glass tank of illuminated liquid, exploding into organic colour clouds; each one different and mesmerising in form. 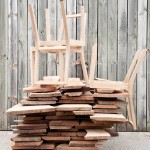 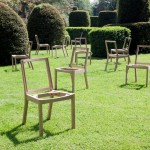 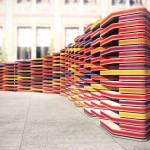 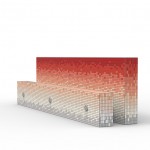 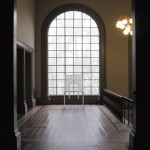 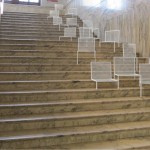 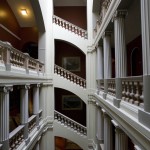 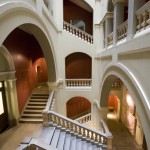 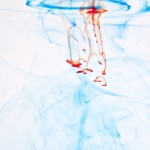 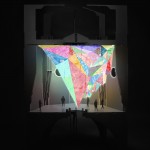 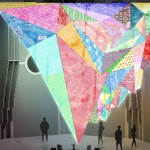 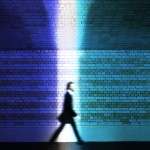 Elsewhere in the building, champagne brand Veuve Clicquot has challenged Keiichi Matsuda to create a digital installation called Prism. It is made up from a series of screens through which fast moving data streams are visualised and coaxed into unfolding shapes and patterns of light and colour. It represents an alternative view of London, exposing unseen data flows in the capital through a sculptural, immersive interface suspended in the V&A’s uppermost cupola.

The American Hardwood Export Council set Royal College of Art design products students a brief to design and produce a functional chair using hardwood. Under the leadership of RCA tutors and designers Sebastian Wrong and Harry Richardson, the use of wood as a material and its life-cycle impact had to be taken into consideration by the students. The resulting designs were developed into working prototypes with the help of Sir Terence Conran’s furniture manufacturing firm Benchmark.

Away from the hub highlights include 19 Greek Street, a new venue that opened this month to be London’s hub for craft and sustainability in design. This six-floor Victorian townhouse houses an outpost of ESPASSO, the US specialists in modernist and contemporary Brazilian design.

For the first time, French crystal makers Baccarat exhibits its creations at designjunction, presenting Vase-O-Rama, a new collection in collaboration with Lausanne’s school of art and design ECAL alongside designs by renowned names such as Philippe Starck and Patricia Urquiola.

A new exhibition space has opened on 4 Cromwell Place opposite the V&A. The space is showcasing 12 new and experimental design projects, including Design Marketo, Haptic Thought and the Wonder Cabinets of Europe.

Elsewhere the 2012 African and African-Caribbean Design Diaspora Festival celebrates the breadth, quality and originality of black talent throughout all creative disciplines from the UK and overseas.

The commercial cornerstone of the festival is once again based at 100% Design in Earls Court. The country’s largest single-site design exhibition can be a struggle to get through, but it does give an interesting overview of the more commercial side of the industry.

Elsewhere there is 100% Norway – marking its ninth year here – which as the name suggests showcases pioneering design from the the country. This year it has relocated to a new design district in Tent in East London. Designers include Hallgier Homstvedt, Vibeke Skar, Magnus Pettersen, Caroline Olsson and Transplant as well as a number of the country’s leading manufacturers such as Northern Lighting, Tonning and Wik & Walsoe.

The London Design Festival runs from 14-23 September at venues across the capital.

Read our report on Digital Crystal: Swarovski at the Design Museum that runs as part of the LDF. Also read our highlights from the LDF 2011.