Yesterday I found myself immersed in the work of Joan Jonas, lost in thought in the vast, subterranean Tate Modern Tanks and then in Herzog & de Meuron’s twisting, spiralling Switch House. Walking through her life’s work, I felt compelled to enter her imaginary, real, brilliant, often bizarre and always colourful worlds. Then downstairs in the Tanks, we were treated to a special preview of Mirror Piece II, a long-admired performance from 1970. Live art feels so intimate, and this was pure visceral joy.

Jonas is a pioneer in the world of performance and the visual arts, and this is the most comprehensive and captivating exhibition of her work ever shown in the UK. Unfolding over ten days and six nights, BMW Tate Live showcases Jonas’s performances and installations including ground-breaking works not staged for 40 years. 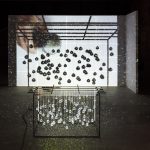 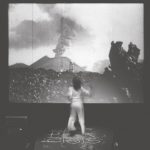 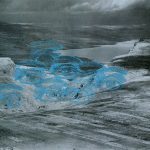 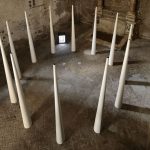 The artist produced a vast and complex body of work to include film stills, sketches, video installations and live performances, and it has been a challenge for the curators here to find new ways to share the way Jonas uses live theatre situations to explore storytelling, conveying her movement back and forth in time, how she constantly remakes and rearranges existing situations.

Jonas creates miniature performance theatres – at once a balance of the instance and preserving the past, keeping memories, re-imagining past textures, re-thinking ideologies. These are action sculpture and her work is always alive – the past and present in constant dialogue.

‘I always thought the activity of putting one object next to another was like making a visual poem,’ writes Jonas about the props she has displayed as a sculpture in the opening room. Her work draws from curious cultures and religions, from imagery, fairy tales. Jonas has long been fascinated by oral storytelling, and you sense this walking around and into her giant-size moving screens. 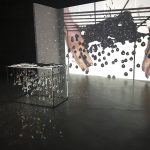 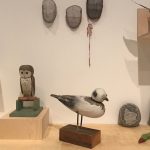 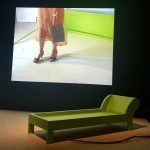 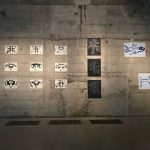 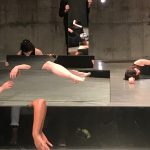 In the late 1960s and 70s, she shot stills in New York, capturing the textures and the colours of a city on the edge of bankruptcy. Later she began working more directly with narrative exploring women’s place in history, ‘as outsiders, witches, storytellers,’ she says. ‘I’ve always been interested in the poetics of how women are depicted, which is political, of course.’

Jonas’s work is presented at the Tate in dialogue with an intergenerational selection of artists – Jason Moran, Mark Leckey, Sylvia Palacios Whitman, Jumana Emil Abboud – demonstrating the powerful impact she has had on contemporary artists today. Throughout these ten days, visitors are invited to explore a series of installations in the Tanks to include her acclaimed Reanimation, a spellbinding environment made from projected footage of Arctic landscapes and light refracted through dozens of hanging crystals.

What makes the Tate Live series so special are the six-night live performance programmes. They will open with Jonas performing live with her long-time collaborator, the jazz pianist and composer Jason Moran. The third and fourth nights will be dedicated to three seminal performances from a formative period in Jonas’s career: Mirror Check, Mirror Piece II and Mirage, the latter performed by Jonas herself for the first time since 1980. The final weekend will focus on Chilean-American artist Sylvia Palacios Whitman, a peer of Jonas who also came to prominence in New York in the 1970s, performing for the first time in the UK and will debut a new collaboration with photographer Christopher Rauschenberg, son of artist Robert Rauschenberg which, in the spirit of the avant-garde, will be kept a surprise.

Art literally comes to life at the Tate Modern Tanks in London with Ten Days Six Nights. This is the first in the BMW Tate Live series designed to interact with the viewer, explore the meaning of art, the role of the gallery and the power of the arts to help shape society.

Dancers and artists move in measured motion around installations, projections and academic text in The Curve gallery at the Barbican Centre. It is the opening night of material/rearranged/to/be, an ambitious new performance work by Siobhan Davies Dance. The touring exhibition is a continuous moving landscape exploring non-verbal communication and gesture through a diverse group of choreographers, dancers, artists, designers and scientists. It is being called ‘investigative arts’ for it fits no rigid category.

This is the 70th project by contemporary dancer and choreographer Siobhan Davies. The artists here were asked to observe the work of Aby Warburg and his findings at the Warburg Institute. In the early part of the last century the German art historian and cultural theorist collected diverse images of gestures from different times and places and positioned them side-by-side to reveal previously-hidden relationships.

The collection at the Warburg Institute in London may at first glance seem disparate, yet over time you begin to see the connection. Davies says the dancers were struck by this idea of pre-and afterlife here. Dancers, she said later in an interview with BBC Radio 4, are interested in afterlife as a performance is such a temporary concept.

She involved scientists in the project to look at the narrative of science, explore neurological impairment. For instance, what it is like to live without certain movements. As language takes centre stage in our modern world, small movements and gestures are forgotten – here they find their own expression.

Dancer Andreas Buckley, for instance, isolates the movement of her feet. Elsewhere, Charlie Morrissey’s Actions from the Encyclopaedia of Experience is a speculative taxonomy of actions which has the dance choreographer performing in relation to categories, from the basic to the bizarre, he projects on a screen.

Collectively, the performances are asking us to look at the body, to look at movement and posture in another way. Davies says as the mind is so often the focus of celebration, we forget we’re in this body, ‘a body that radiates information outwards and brings information back in… it is an informative tool,’ she says in the Radio 4 interview, adding ‘the body is so deliciously complex’.

For three decades Davies has been broadening contemporary dance to include other art forms, continuously collaborating with those from outside the confines of dance. She is unlike so many others, seduced by the allure of the more sensational side of dance, and the crowds they attract. It means her work is not always easy to digest – you have to work hard here, gathering the ‘shards of ideas’ as Davies puts it. She calls her latest work ‘performative installation’.

The arts such as music, dance, design create the possibility to make us more human for they guide us to see things differently, to explore the world in unique ways – often ever-so subtly. As we enter this rather dark period in modern politics, it may seem trivial to discuss the arts as a vehicle for change. Yet more than ever it is vital to defend the right to free expression and use the arts to help make change happen.

material/rearranged/to/be will be travelling the UK until 9 July and should not be missed. Find out more here. 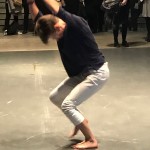 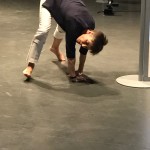 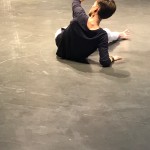 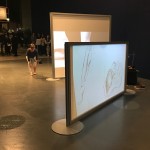 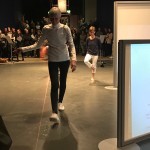 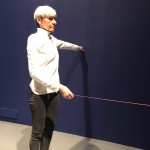 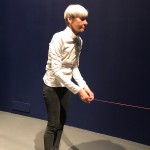 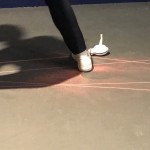 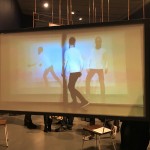 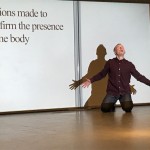 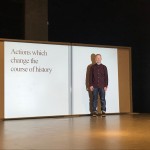 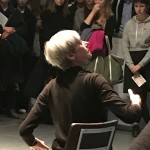