‘I’m interested in space and the movement of people and objects within space. There is a certain magic to it. It is as if you are inventing an order of things. I believe there is a secret relationship between space, objects and perceptible and imperceptible movements. Every artist working in this field tries to interpret that relationship in his or her own way. It is the composition and balance of those elements that give rise to the essence of drama and – why not? – the essence of life itself.’ These are the words of Isamu Noguchi, one of the most lyrical artists of the last century.

Known today mostly for his much-copied 1944 Coffee Table (an early edition of which sits here before me) and Akari paper lights, Noguchi tirelessly pushed the boundaries of art and sculpture. Working across almost seven decades and with a multitude of materials and mediums, his carved stones, stage sets, paper lanterns, portrait busts, mobiles, and playgrounds were collectively designed to be tools for understanding our place in the cosmos, and our relationships to history, nature, and one another.

The Barbican gallery in London is hosting ‘Noguchi’, the first of a touring European exhibition which sets out to document the work of this visionary creative. Thematically organised and curated to feature only the words of the artist himself, the exhibition successfully immerses the viewer in the mind and the world of Noguchi. The stripped back béton brut halls of the brutalist Barbican and the advantage of the two levels, allow the 150 works to breathe freely, and with the absence of excessive curation, the viewer is left in an almost meditative state to observe and absorb.

Born in Los Angeles in 1904, Noguchi’s mother was an Irish American writer and his father a Japanese poet who had abandoned the family on his birth. At the age of two, his mother took him to Japan to reunite with his father, sending him back to the US and onto Indiana for schooling for fear that the biracial child would receive racism in Japan. Noguchi eventually settled in New York where he trained in traditional sculpture, but his real break came while on an internship at the Paris studio of Constantin Brancusi. Here Noguchi gained a seminal introduction to the modernist principles of abstraction and presumably met the international avant-garde who were gathered in Paris in the 1920s. It was thanks to Brancusi that he became passionate about materials and craft – elements that remained fundamental to his work throughout his career.

By the end of the decade Noguchi was back in New York sculpting portrait busts, mainly to make a living, many of which are on display at the Barbican. They are a curious mix of expressionist and whimsical. He later referred to them jokingly as ‘headbusting’ since it was a useful way to make money and meet people. It seemed to have worked as they attracted the attention of the pioneering choreographers Ruth Page and Martha Graham for whom Noguchi went on to design sets using an interplay of his sculptures. He also befriended the architect and theorist R. Buckminster Fuller, who he referred to as the ‘messiah of ideas’. The two shared a vision for shaping a more equitable world through technology, innovation and design, collaborated on several projects including a futuristic car.

By the 1940s, Noguchi was working with manufacturers Knoll and Herman Miller. He continued to explore the possibilities of material and form with his interlocking marble slab sculptures and Lunars lights, created after his devastating experience of ‘voluntary’ internment at a camp for Japanese Americans in Poston, Arizona in 1942. The Lunars went on to influence some of his best-known works, the sculptural and ethereal Akari light sculptures – a contemporary take on traditional chochin paper lanterns using washi paper and electric bulbs. After the war, Noguchi travelled to Europe and Asia to understand the different uses of sculpture in a spatial and cosmic sense. He wrote at the time, ‘I find myself a wanderer in a world rapidly growing smaller. Artist, American citizen, world citizen, belonging anywhere but nowhere.’

Noguchi went on to complete over twenty public works around the world – gardens, fountains, playgrounds, plazas – using space to challenge civic and social life and its intersections with nature and time. His final contribution was Moerenuma Park. Located on a reclaimed municipal dump outside of Sapporo in Japan, it included play sculptures, fields, and fountains, and a revised version of his first-ever play rejected concept, the monumental, stepped pyramid he called Play Mountain (1933). Moerenuma Park was realised two years after Noguchi’s death in 2000.

Ultimately his was a life dedicated to sculpting the world he wished to inhabit. With a deeply humanist perspective, heightened by his prison experience, Noguchi understood the power of art and artists to make sense of the world. His work was political art. Wandering the exhibition, immersed from above and below in his delicate paper lanterns, colourful furniture, architectural playgrounds, and expressive and often funny abstract and figurative sculptures, you get the sense that in life and work, Noguchi remained an explorer with a philosophical and playful eye. In his own words: ‘Art for me is something which teaches human beings how to become more human.’

There is a growing trend across the automotive world to champion the global car – the world car. This is generally a small urban vehicle that is pretty non-descript with little indication as to its origin – where is was designed or indeed made. One emerging designer has set about to question this by offering a contextual mobility solution.

‘I can never understand how a Swiss designer living in California can design a car for Thailand without knowing the culture,’ says Ido Baruchin. ‘There is too much flattening and we run the danger of becoming a mono culture,’ says the young Israeli designer who has just graduated in vehicle design from the Royal College of Art in London.

His concept Otto’s task is to challenge the monolithic notion of the world car – the system aims to bring social and ecological sustainability to vehicle manufacturing and design. The concept not only responds to the needs of various societies but crucially also involves both global and regional manufacturing where local materials, labour and craft are utilised. 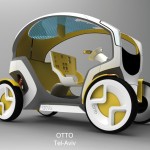 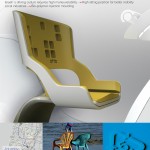 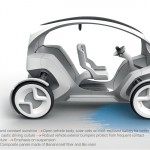 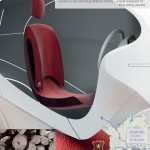 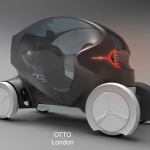 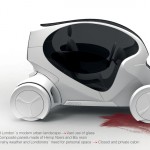 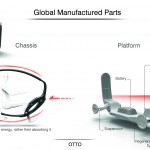 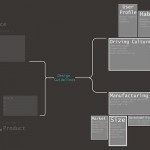 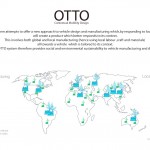 Each market will have its own Otto. ‘The idea is to have one main structure, but then the rest of the car is locally sourced. Plus design wise it will be relevant to the market,’ he notes.

In Tel Aviv, on the other hand, manoeuvrability is a key issue as traffic can be intense. The seating position is therefore higher and the steering is more like a scooter. Journeys are shorter there so the harder seats can be made of locally sourced plastics. ‘This is about sustainability that isn’t just ecological,’ says Baruch.

Sadly the designer is planning to move careers into product design. ‘Automotive design is very challenging but the industry and all the politics are the problem,’ he explains his decision. ‘They are talking of becoming green but transporting one person in one car is not very sustainable.’

Read other published reviews from the show: Shared Transport Solutions, Family Dynamic and Monoform: a new expression of movement