‘It is special,’ smiles McLaren Automotive chief executive Mike Flewitt pointing to the latest 720S that proceeds the 650S in the Super Series. ‘It almost feels like a milestone in the maturity and development of the company,’ he told me at the Geneva Motor Show earlier this week for this car represents the first production vehicle to be replaced since McLaren Automotive was born seven years ago. ‘We started out with one car, the 12C, which evolved to be a range of cars. Now that journey is over, we are replacing them one by one with new models.’ This includes 15 cars planned for 2022, half of which will be hybrids.

The 720S design is dramatic – each element almost feels like it could stand alone as a great example of industrial design. The two-seater debuts a bold new face for the Super Series and features an expansive, dramatic ‘fighter jet’ glass roof made possible by the light and tough all-carbon tub that is at core of this car. There is a rawness to its layered look, each sheet teasing us, inviting us in to witness the extreme power that lies beneath – the four-litre twin turbo V8 that illuminates in the engine bay for an extra touch of drama. 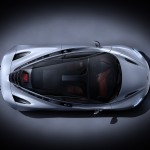 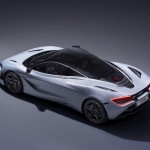 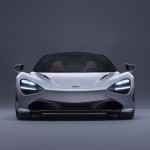 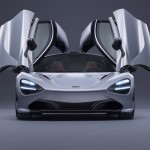 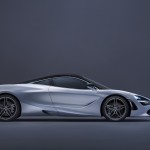 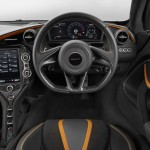 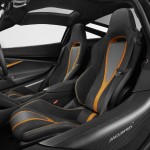 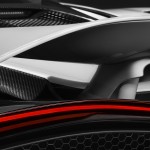 I spent some time at the McLaren Technology Centre outside of London last month to understand how design and engineering worked so intimately to achieve these high goals. Chief designer Robert Melville says his brief was to create an awe-inspiring product to ‘visually communicate the intention of the car even when standing still’.

He was inspired by original Bruce McLaren F1 – a road car with an incredible versatility to be a perfect road and track vehicle – and the spirit of company founder is very much evident in the design of this car. McLaren design cannot conform to the norms of automobile design for the brand is committed to advancing technology, working with complex materials and shapes, and crucially ‘taking risks,’ says the designer. ‘We have to be brave and bold with our design and not follow trends.’

Form is very much concerned with assisting performance on all McLaren cars. ‘We removed all the fat, shrink-wrapping and sculpting the body to convey aerodynamic functionality. It is like a three-dimensional jigsaw for us,’ says Melville. The distinctive layered exterior design communicates the passage of air over and through this car whilst forming a nimble visual aesthetic. There are no radiator intakes on the side of the car; instead the ‘double-skin’ aerodynamic form of the doors channel air to the high-temperature radiators that cool the mid-mounted engine.

Step inside and the layered design theme continues this sense of theatre – something that McLaren admits may have been lacking in its past cars. The feel is altogether more polished and more luxurious here with a wide range of tactile and technical fabrics available to order and individualise through the help of the McLaren Special Operations bespoke team of designers and engineers.

Flewitt says: ‘It is nice seeing the reaction of people when they see this car. That’s when it clicks that this isn’t an evolution of a car but a step into something new.’

Read my review of the McLaren 720S on the road