‘Design is about optimism,’ offers sir Terence Conran, ‘and this friendly space is full of surprises. It is about love rather than fear. I hope we can educate and inspire generations to come,’ says the founder of the Design Museum. Heartfelt words in these politically dark times.

We are being treated to a preview of the museum’s much anticipated new premise in Kensington, on the edge of Holland Park in west London, which will officially open its doors to the public on 24 November. Conran continues: ‘It will allow for us to create a world-class and truly international space for the celebration of design and architecture. It is a cathedral of design – it felt like this when I first walked into this building.’

Conran founded the original Design Museum in 1989 in a much more modest building in Shad Thames, south east London which closed in June. ‘Moving the Design Museum to Kensington is the most exciting part of my career so far,’ he says. ‘It’s a dream that’s been materialising for ten years.’

This was an £83 million project that took five years to complete. It is a collaborative project too, involving some world-leading architects and engineers including OMA, Allies and Morrison and Arup who painstakingly restored the former Grade II listed 1960s Commonwealth Institute’s spectacular concrete roof and distinctive façade.

Using radical engineering techniques, the exterior team removed the original concrete floors which meant having to prop the roof temporarily on a steel structure 20-meter above ground. Much of the detailing on the original façade has been recreated to resemble the blue skin of the post-war building. 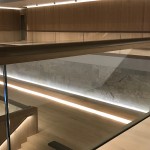 The interior design is the work of UK architect John Pawson, noted for his thoughtful designs and refined use of materials. Here too he has sensitively retuned the interior, keeping much of the feel and integrity of the former building. Inside is open, welcoming and warm – it is a peaceful place offering a series of calm, atmospheric spaces arranged around an oak-lined atrium. He says: ‘You don’t have to knock down building to build architecture.’

The new Design Museum offers some 10,000 square-meters of gallery space, triple that of Shad Thames, allowing for a permanent display designed by Studio Myerscough, as well as two temporary exhibitions and enough space for resident designers, a members’ area, café/restaurant and shop. 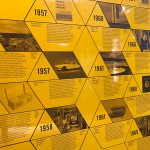 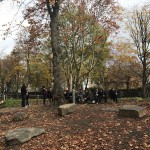 The museum will explore objects past and present but also crucially ideas surrounding creativity and speculative design. ‘Design is a way to understand the world around us,’ explains the museum director Deyan Sudjic. ‘It makes technology work, it’s a reflection of our culture as well as an economic engine. We see the Design Museum as a forum to explore the impact of the rapid changes that design is bringing to society.’

Conran says this is a way of also showing the government that design is pivotal to our quality of life – something he’s been advocating for years – but also to manufacturing and to industry. ‘I think every manufacturer should have a designer on its team,’ he smiles. ‘We truly want to be international in our approach, and show that design, manufacturing and business are intertwined, that one cannot survive without the other.’