The private space is seldom a major topic for an international exhibition, especially one that focuses on the Arab world. ‘Home: Contemporary Architectural Interpretations of the Home in the Arab World’ has set out to do just this.

This intriguing exhibition, intimately curated at the Mosaic Rooms in London, explores the domestic architectural space in the context of the Middle East and North Africa and by doing so raises all sorts of intriguing ideas around Arab identity, and the sheer cultural diversity in the region.

Architects representing Bahrain, Egypt, Iraq, Lebanon, Morocco, Qatar and Yemen investigate contemporary regional domestic architecture, new modes of social housing and what makes a home when you take it away from its geographical location. 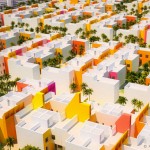 Shahira Fahmy Architects, for instance, challenges the traditional boundaries of the interior and exterior of the Egyptian home. Her labyrinth space takes us on a little journey to explore a new type of domestic living that no longer reflects on the duality of private and public, instead merging the two spaces.

Kilo Architecture proposal focuses on the objects that inhabit the home rather than the structure itself. The Paris based firm’s artful collage presents ten key objects that define a sense of place and national identity for the Moroccan diaspora with images of ‘motherland’ reflecting on the white washed installation.

‘With the Arab world everyone starts talking about the courtyard, contradictions of tradition and modernity – we are tired of this conversation,’ partner Tarik Oualalou tells me at the exhibition. ‘We sometimes forget as architects that architecture is not just about buildings but the people who live in them.’

Oualalou is also part of the Moroccan diaspora. His research found that this group, no matter what age, tend to recreate a mini Morocco made of eight to ten of these key objects wherever they go. Funnily enough the majority of these objects are no longer made locally but in China, so in a sense it isn’t about artisan but the rituals.

‘What makes the home is the objects, the rituals, the software not the hardware,’ says Oualalou. ‘Recreating this sense of place is interesting from a political sense too. Moroccans always integrate but at the same time feel deeply Moroccan and keep a strong tie, and that tie is rooted in the home.’

In complete contrast, London-based architect AMBS has looked at ways of rebuilding communities in Iraq. The project looks at a non-site-specific low-cost housing scheme. The configuration of maisonettes creates natural courtyards designed to encourage the formation of neighbourhoods.

The scheme is highly sustainable too – soil from digging the foundations can be used by local people to create their own bricks and wind towers artfully integrated into the design will provide the essential energy.

‘In high-density living areas people identify with courtyards, children can play and it gives a sense of ownership and a way of creating communities,’ explains architect Marcos de Andres. The brightly coloured houses form clusters where there would be schools, shops and other facilities as a way of looking at rebuilding cities.

‘Bearing in mind this is cheap housing you can still make it cheerful, reliable, dynamic rather than boring or repetitive. It is a step forward to rebuilding the country,’ he notes.

Home is organised by London based Museum of Architecture. It forms part of London Festival of Architecture and will be on exhibit at the Mosaic Rooms until 7 July 2012.

There it is, like a curiously wrapped present on Christmas morning. Indeed, it feels as though the justification for this building was made in a similar fashion to when you are conducting a last minute Christmas shopping spree; lots of stuff on the shelves but nothing quite fitting the bill. The result being a grudging compromise.

When I saw the original design by Studio 3XN it felt less like a bargain. In 2008, the proposal had attitude, optimism and sleekness; the completed form in 2011 (after 3XN’s role was reduced and given over others including Manchester based architects AEW) conveys a dramatically weaker relation to such positive nouns.

Growing up in the North West of England, I have become accustomed to these blocks and shapes popping up in the town centres.

I was in my teens when Urbis was completed in Manchester. After grand proclamations were made upon the completion of Ian Simpson’s glass structure, it now remains in the city centre still struggling to fit in like someone who arrives late to a party, and then remains too sober to relax with the revellers.

The result is a building that sits awkwardly on the edge of the town centre – and to continue the personified comparison – with nothing to say, and not many people taking much notice. In a nihilistic and somewhat melancholic nod to Morrissey, perhaps the bigger question these buildings start to ask is to whether their existence is necessary at all.

I imagine the Liverpool Museum will join such dialectic.  Urbis, when completed, was a museum of the city, housing an exhibition on not just Manchester, but the cities of the world. It has failed.  Since 2002, it has housed numerous alternative exhibitions with little success to justify its £30m cost. It is now about to open as the National Football Museum.  I hope this time is has more success, not least for the sake of the people of Manchester.

Likewise, I really wish for Liverpool Museum to succeed, for the people of Liverpool. After all, the waterfront is what fills many Liverpudlians with architectural pride – to damage that by debunking the waterfront with mediocre compromise would represent a crushing failure. Yet it is difficult to subdue a first impression that the Liverpool Museum represents a glaring missed opportunity for the city.

It is bold in the jarring relation of scale to its surroundings, in the odd aesthetic of repressed expression, in its gingerly relation to the surroundings; unfortunately it is not seemingly bold in an outright positive manner.  It is nice to have something new, like it is nice to get a computer console or exercise bike at Christmas.

However, like a good gift shows an understanding of the receiver’s character, a good building shows affinity for the environment onto which it is deposited.

All rights and labelled images are covered by