‘If houses were built industrially, mass-produced like chassis,’ proclaimed Le Corbusier in his manifesto Towards an Architecture, ‘an aesthetic would be formed with surprising precision.’ The Swiss architect was famously obsessed with the automobile – almost in love with what he called the perfect machine. To him, and many progressive thinkers of the time, the automobile was a symbol of modernity and a focal point in his visions for futuristic utopias.

Voiture Minimum Le Corbusier and the Automobile explores the architect’s involvement with the automobile, designing in 1936 ‘a minimalist vehicle for maximum functionality’ which he called Voiture Minimum.

An engaging read by Antonio Amado, a Spanish architect and a professor at the University of La Coruna, the book is almost an exploration of ideas on cars and mobility at this junction in history. Amado is a fluid writer, creating a charming narrative, chapter after chapter building up to the climax that is the story of the car itself.

This includes a brief history of the French manufacturer Voisin and the impact founder Gabriel Voisin had on Le Corbusier. An architecture enthusiast he came up with the idea of prefab housing of which subsequently Le Corbusier wrote about in this in his magazine L’Esprit Nouveau.

By the 1930s Voisin was no longer able to make the luxury cars he made in the 1920s, mainly due to the American depression and the popularity of more affordable automobiles created by the likes of Ford. Instead under his new consultancy he designed the Biscooter (double scooter) prototype – a minimalist lightweight vehicle for two to three occupants.

The car proved to be quite popular in post civil war Spain, manufactured there under the name Biscuter-Voisin and surviving almost ten years.

We also learn of other key architects of the time’s involvement with the automobile in the context of both town planning ideas and automotive design  – from Adolf Loos, Walter Gropius, to Jean Prouvé and the American Frank Lloyd Wright.

Amado even dedicates a chapter to car design between the two wars, exploring various key trends in automobile design crucially the impact of aerodynamics and the story of the Volkswagen ‘people’s car’, the Beetle.

Incidentally, Le Corbusier claimed his Voiture Minimum had been the inspiration for this car. He went as far as saying the car, designed for the 1936 SIA competition, had originated in 1928, before the Beetle. Here Amado, after extensive examination of archival and source materials, disproves this. In fact, he hints that the influence may have gone the other way.

It is almost half way through the book when we are introduced to Voiture Minimum, designed in collaboration with Le Corbusier’s cousin Pierre Jeanneret. This is a detailed account, highlighted with copies of original letters written by the architect to various car manufacturers, proposal after proposal, and endless sketches that ultimately lead to the final design.

Sadly though Le Corbusier’s vision was never realised and his car never made it to production. A full-scale model, however, was sculpted in 1987 by the Italian car designer Giorgio Giugiaro to exhibit at L’Aventure Le Corbusier: 1887-1965 at the Pompidou Centre in Paris. Two years later a second prototype was created to mark the opening of the Design Museum in London.

Voiture Minimum Le Corbusier and the Automobile is written by Antonio Amado and published by MIT Press. The books was recently voted one of the ten best design books by The Independent newspaper. 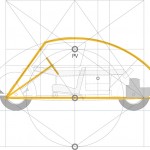